“The best people lead to the best outcomes, and through cooperation and collaboration, we have worked together to build this port up. Our future is very bright, and our best years are ahead.”

SC Ports Authority has undergone a major renaissance over the past decade, readying itself to flourish in the future.

Newsome arrived at SC Ports in September 2009 with numerous challenges before him — container volumes were declining, and the United States was reeling from one of the worst recessions in history.

“Jim leads the organization with great vision, decisiveness and enthusiasm. One of his best assets is recognizing talent in his team members and entrusting them to lead alongside him to further strategic initiatives. Our Port has grown immensely under his leadership, leading to job creation and economic growth around the state.”

Newsome also championed a cultural initiative, culminating with the opening of SC Ports’ new headquarters building in Mount Pleasant and being recognized among Best Places to Work in South Carolina.

Newsome now looks to the future with the same energy, tenacity and optimism as when he first took the helm in 2009.

“We were at a real crossroads when I joined SC Ports Authority in 2009, and I am immensely proud of where we are today,” Newsome said. “SC Ports is pursuing vital infrastructure projects and growing cargo volumes, all of which is made possible by our excellent workforce and maritime community. I know our best days are ahead.”

Newsome attributes the Port’s success to all those who make its operations possible — the SC Ports team, senior managers and the entire maritime community, as well as the board of directors, local elected officials, SC Legislature and Congressional delegation.

“Even with all we have accomplished, we must strive to continue as the preferred port in the U.S.,” Newsome said. “I want us all to ask ourselves every day, ‘What is one thing you can do today to move the organization forward?’ Imagine what we can accomplish in the next 10 years.” 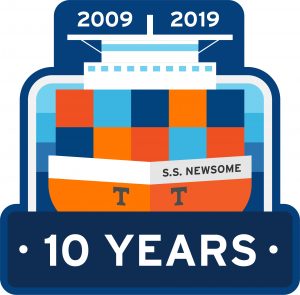