As measured in pier containers, or total boxes moved across SCPA’s docks, fiscal year-to-date volume is up by 6,227 containers. SCPA handled 95,608 pier containers in October, bringing total volume to 388,883 boxes since the fiscal year began.

“Our incremental container volume increase in October is reflective of a worldwide slowing in container trade, but we are optimistic that growth will resume in both imports and exports as the Southeast economy grows,” said SCPA president and CEO Jim Newsome. “We also expect major emerging market economies to restore growth in demand based upon strength of a growing middle class.”

“Amid the shifting structure of the container industry, including consolidations of major carriers and an extremely difficult financial picture, SCPA is well-prepared to meet the demands that will be required of top 10 U.S. ports going forward. Bigger ships will be deployed across fewer services, and our port is making the necessary investments in cranes, terminal infrastructure and capacity, and harbor deepening to meet these requirements,” Newsome said.

Board Action
In action items, the Board approved funding for the conclusion of the Advanced Gate System installation at the Wando Welch Terminal as well as total implementation the North Charleston Terminal in February 2017. The Board also approved contracts related to construction and security services for the Leatherman Terminal, installation of bracing on three ship-to-shore cranes and the purchase of an aerial lift for rubber-tired gantry crane repairs.

Crane Commissioning
Yesterday evening SCPA celebrated its two new super post-Panamax cranes with a lighting show and fireworks display on the dock of the Wando Welch Terminal. The cranes, which offer 155 feet of lift height above the dock, were produced by Shanghai Zhenhua Heavy Industry Co., Ltd.in China and delivered to SCPA in August.

SCPA has ordered two additional ZPMC cranes of this size for delivery by the end of 2017 and plans to raise four of its existing cranes to the same height.

“We are planning for two shipping services with 14,000 TEU vessels to call Charleston by mid-2017, which will be a game-changer for the East Coast ports,” Newsome said. “By the end of next year, SCPA’s $44 million wharf strengthening project to handle larger ships will be complete, and we will have eight cranes with 155 feet of lift height capable of handling two 14,000 TEU ships simultaneously.”

SCPA also expects construction to begin on the first phase of its 52-foot harbor deepening project to begin by the end of next year, making Charleston the deepest harbor on the East Coast by 2020. 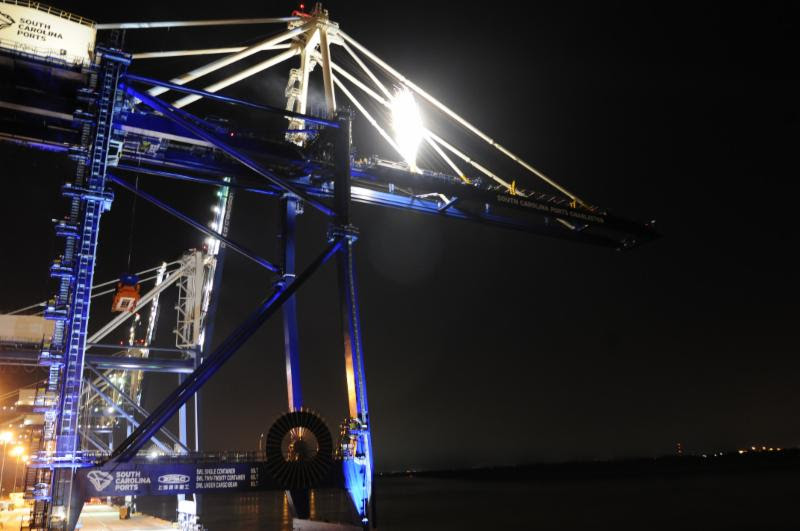 Above: SCPA held a celebration of its two new post-Panamax cranes with a lighting and fireworks show on the dock of its Wando Welch Terminal.