CHARLESTON, SC — Oct. 22, 2019 — South Carolina Ports Authority has long been a powerful economic engine for South Carolina, and as container volumes have doubled over the past decade, the Port’s positive economic impact on the state has significantly increased.

SC Ports Authority (SCPA) makes a $63.4 billion annual economic impact on South Carolina and creates 1 in 10 S.C. jobs, according to a new Economic Impact Study from the University of South Carolina’s Darla Moore School of Business.

“SC Ports Authority has further established itself as one of our state’s premier economic drivers, creating 1 in 10 jobs and a $63.4 billion economic impact on South Carolina,” Gov. Henry McMaster said.

The analysis finds that SC Ports’s operations and all associated activities correspond to nearly 225,000 jobs and $12.8 billion in wages and salaries for South Carolinians that would otherwise not exist.

The average income for Port and Port-related jobs is roughly $57,000, which is approximately 32% higher than the state average income, the analysis found.

The economic benefits of SC Ports can be felt throughout the state, and particularly in the Upstate, which sees 52% of the Port’s statewide economic impact, followed by the Midlands at 25%, the Lowcountry at 12% and the Pee Dee at 11%.

“SC Ports is a tremendous asset for the state,” SCPA Board Chairman Bill Stern said. “Its role of moving cargo between South Carolina and global markets leads to job creation and industry recruitment. Many of our state’s biggest economic development wins would not have come to fruition without the Port. We are deeply proud of the growth SC Ports brings to the state and the impact it makes on South Carolinians.”

SC Ports has doubled its cargo volume over the past decade; much of that growth stems from an increase in imports and exports tied to South Carolina’s boom in advanced manufacturing.

“SC Ports’s rapid expansion over the past decade occurred in part by facilitating the advanced manufacturing boom,” Von Nessen said. “SC Ports supports businesses and manufacturers as they invest in South Carolina. This ultimately leads to new jobs and higher wages, as well as disposable income being spent in communities and the recruitment of suppliers — all of which propels S.C.’s economy forward.”

Buoyed by the cargo growth over the past decade, SC Ports now looks to further diversify its cargo base, particularly with retailers and distribution centers.

“The dedication and expertise exhibited by SC Ports and the entire maritime community ensures we are the preferred U.S. port for customers, and our investment in critical infrastructure ensures we remain globally competitive and capable of handling large, cargo-laden ships,” SC Ports President and CEO Jim Newsome said. “Over the past 10 years as CEO, I have seen the Port grow significantly. This growth enables SC Ports to make a positive, lasting impact on our state’s economy and on South Carolinians.” 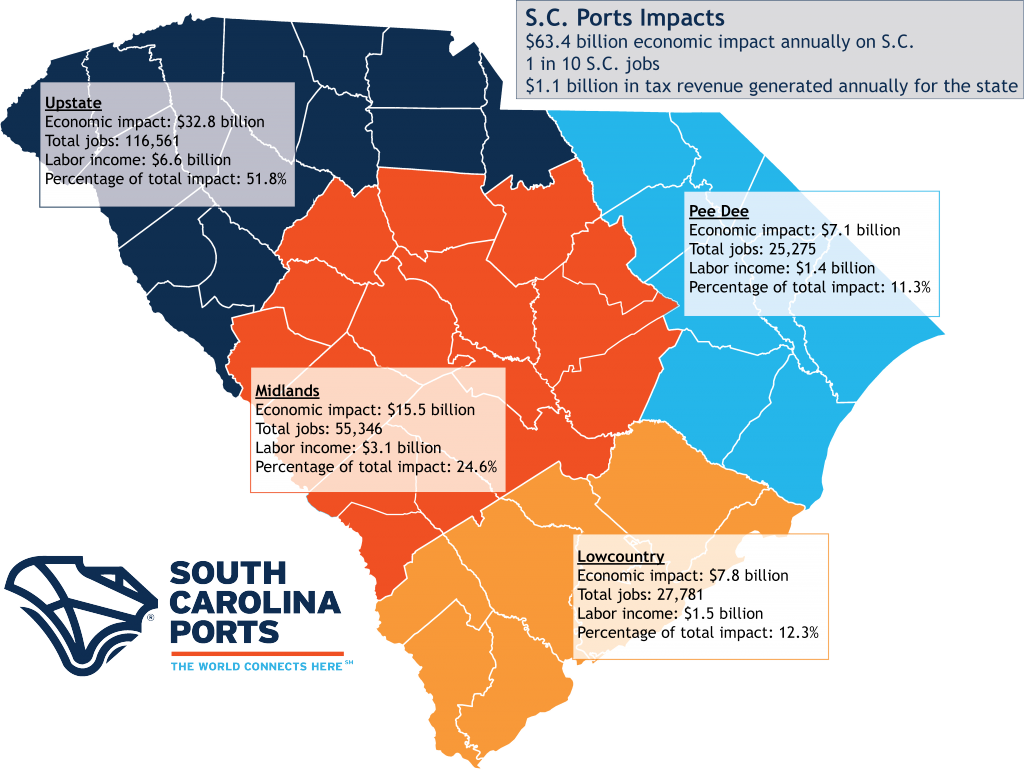